Welcome to the webpage for the City of Placerville's Historic City Hall!

The building was originally constructed as the Confidence Engine Company No. 1, a volunteer fire company.  They originally began as the Mountaineer Engine Company on May 22, 1857, but changed their name in June after they purchased a used fire engine, named "Confidence" and found they were unable to remove the engraving.  The original engine hall had been damaged by fire in September 1860, and the present building was built in fall of that same year.  The fund-raising balls held by the company were a local hit and in the late 1890s, the building was used for early meetings of Placerville's Seventh-day Adventist Church.  The building has also served as the police department, jail and a court house.  There were even some instances where Confidence Hall was used as the venue for the El Dorado County Fair.

In 1902, the building was established as City Hall for the City of Placerville, located on the first floor.  The Placerville City Library, the first public library in the county, occupied the 2nd floor of the building beginning in 1906.  The space was also shared by the Placerville City Clerk's Office and separated by a gate which was opened only after the Clerk had finished his work. The library remained on the second floor until 1947, after which the was used fully as Placerville's City Hall until 2005.

The adjacent structure with a wooden balcony is known at the Immigrant Jane Building, named after Jane Stuart.  Build in 1861, Immigrant Jane Stuart funded its construction by driving a herd of horses across the Great Plains and selling them to a local dealer.

Confidence Hall and the Immigrant Jane Building share a common wall and an interior hallway and door that have been utilized as a single tenant office.  Both are listed in the National Register of Historic Places (NRHP) since January 4, 1982.

Thank you for taking time to learn about this local treasures. 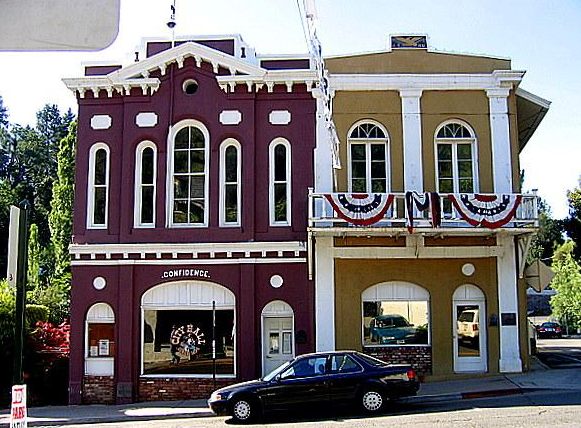 2015 Feasibility Study for the Rehabilitation of Old City Hall

Secretary of the Interior Guidelines for Historic Building Preservation

Request for Proposals for Reuse of Historic City Hall

Proposals and Presentations Received and Ranked by Scoring: