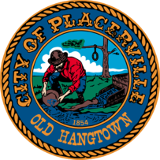 "Nick Stone began his career with the City of Placerville Public Works Department in May of 2014. Prior to being appointed as the Director of Public Works in 2019, Nick was the Superintendent of the Public Works Department. Before Nick began working at to the City of Placerville he was employed by a private General Engineering Contractor for several years where he worked on a wide variety of water, sewer, and streets projects for several municipalities, state, and federal agencies. He currently holds a Grade 3 Water Distribution Certificate with the California State Water Resources Control Board, and has completed multiple programs related to Utility Management and Water Distribution from CSU Sacramento and Utah State University. The Public Works Department  is responsible for all maintenance and operational activities for streets, signs, storm drains, street sweeping, parking lots, snow plowing. The Department also oversees the Water Distribution and Sewer Collection Systems."